2020 a record year for LD Pensions

The assets in LD Pensions has never been higher than the 89.4 billion DKK it amounted to at the end of 2020. At the same time, a record-breaking amount of DKK 56.4 billion has been disbursed in 2020.

Summary of the annual report 2020

Despite record-breaking disbursements, the assets for the holiday allowance and cost-of-living allowance amounted to DKK 89.3 billion at the end of 2020. This means that in the same year as LD Pensions can celebrate its 40 anniversary, the assets are record high. 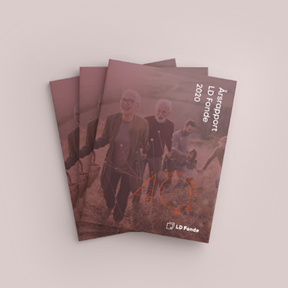 Get the annual report right here.

It's only published in danish.

In autumn 2020, early disbursement of three weeks holiday allowance took place. An amount of DKK 52.1 billion was disbursed to the employees. It became an important stimulus to consumption, where parts of the business community had been negatively affected by corona restrictions for a long time. An amount of DKK 57.3 billion is left in the Holiday Allowance Fund. This is amount stated by the employers after deduction of the total disbursements in 2020.

The Holiday Allowance Fund increased its value by DKK 0.5 billion

The return on investment and the interest payment (indexation) of funds remaining with the employers gave a total result of DKK 693 million in 2020, of which the fund must settle 123 million DKK to the state as interest on the government funding of early disbursements in 2020. This gives the members a result of DKK 497 million after PAL (pension return tax) tax and costs. The result must be seen in the light of the fact that only a small part of the holiday allowance was invested in 2020. Furthermore, the assets were only invested for part of the year, and interest payment (indexation) on the assets remaining with the employers only was in force for 4 months, namely from 1 September to 31 December 2020.

LD Pensions has thus increased the holiday allowance by DKK 0.5 billion due to its result in 2020. For the individual employee, this results in a positive adjustment of their assets by of 0.9 % as per 31 December 2020. The adjustment of 0.9 % is after PAL tax and costs.

The total investment return for the Cost-of-Living Allowance Fund is distributed with DKK 769 million in LD Discretionary, which is LD Pensions’ largest investment portfolio and which comprises 88 % of the members' assets, and DKK 534 million in the other portfolios in the Cost-of-Living Allowance Fund. The total equity return amounted to 12.5 %, while bond investments yielded 0.9 %. In LD Discretionary, the total investment return amounted to 3.2 %. The portfolio, Danish Equities delivered an extremely high return of 36.1 %. The lowest return was obtained for LD Short Term Bonds, which ended at -0.2 %.